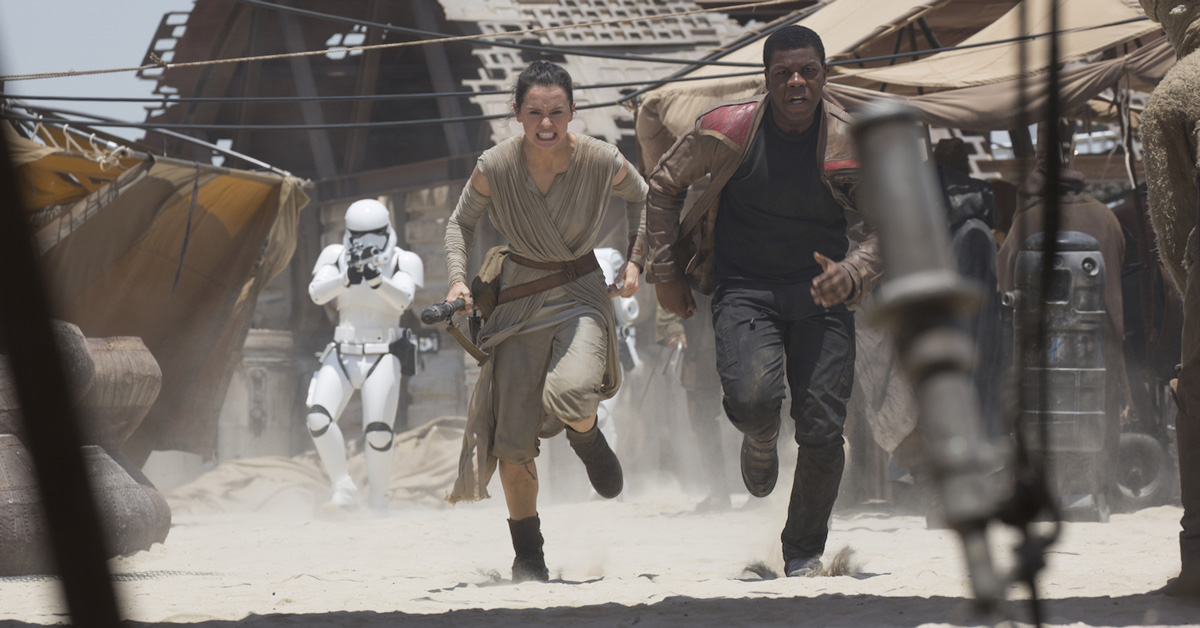 Revisiting The Force Awakens on Blu-ray, is an interesting proposition. Would it stand up to a 3D screening in a packed cinema filled with an audience that was gasping, laughing cheering and holding their breath in unison? And the answer is a definite yes. People do not often think of the crowd experience when watching a film and how much it impacts on the reaction to the material – it’s not generally considered as important as the kind of way an audience can change and mold the experience of seeing a play at the theatre. But with a film that was as resoundingly popular as Star Wars: The Force Awakens it was virtually impossible to see it in a cinema that wasn’t either packed or filled with people who really, really wanted to be there. Most of the time cinema audiences aren’t quite that in concert. The impact on material seen with a group of people who are thoroughly enjoying it is difficult to quantify, but it certainly has an affect.

However on Blu-ray The Force Awakens has lost none of its crowd pleasing charm.

And it’s no exaggeration to say that the film is crowd pleasing. After the huge disappointment of George Lucas’s prequel trilogy, and the CGI-tinkering-for-the-sake-of-it he perpetrated on the original trilogy, Star Wars fans were looking forward that something that would relive the joy of seeing those original film for the first time. And The Force Awakens delivers that in spades. What’s great is that it does so but not just pandering to those 40 year old fans who saw the original films at the cinema in the 1970s and 80s, but by introducing a whole new set of characters and stories – a new generation for a whole new generation of audiences.

The night I saw The Force Awakens at the cinema there was a marked difference to a lot of films where stories for children are unashamedly aimed at adults (I’m looking at you here DC Comics); the auditorium was filled with parents with their kids, passing the baton of something they had enjoyed as children onto their offspring. Hardly any adult who enjoys the original Star Wars movies will deny that it was seeing them as a child which was a formative experience. A formative experience which has kept the movies in their lives. Interestingly The Force Awakens carries a 12 rating (it was 12A at the cinema) which is for violence and threat. It’s interesting because there is not a single moment as gory as Alec Guiness’s Obi Wan Kenobi cutting off someone’s arm in a bar, and that was in the first film which retains its U rating nearly 40 years later.

What The Force Awakens shows, depressingly, is just how badly written, directed and in some cases acted, the prequel films were. For example there is one scene in The Force Awakens where in the space of roughly two minutes Adam Driver as baddie Kylo Ren shows more about the personal battle between the light and darksides of the force than Hayden Christianson had the opportunity to display in two whole films as Anakin Skywalker. It is an incredible piece of performance and leads into one of the most powerful and surprising moments ever in the Star Wars cinematic universe.

J. J. Abrams, the director of The Force Awakens is a big Star Wars fan and wanted, in reintroducing the characters from the original films 30 years on, to honour the stylistic qualities of the those films and to use modern methods to make the CGI seamless and virtually invisible. By shooting on film, by using tangible, practical props and explosions, as well as augmenting the reality captured on set instead of grandstanding the CGI like the prequels did, the film is a beautifully shot marriage of the two. The cinematography is astonishingly good, this is the best lit film of the entire seven episodes. It looks beautiful.

Combined with the pacing, which was glacial in the prequels but fantastically peppy here, what we have is something that seems magical and urgent – like the original films shot on handheld cameras. The pacing is also the best it has been yet.

But what of story?

If you know nothing of Star Wars, this will make little sense – but won’t preclude you from understanding the film – enough is recapped in the movie to let you dip your toes into these sci-fi waters unencumbered.

It is thirty years after the events of Return of the Jedi – the Empire has been replaced by another set of equally nasty baddies called The First Order who are also equally slave to the darkside of the force. The public face of The First Order is Kylo Ren, someone who is himself rather in thrall to the memory of Darth Vader. Luke Skywalker has gone missing and his location is in a map hidden in a cute droid called BB-8. A droid who needs to get back to the resistance. Through accident and rebellion, the droid has fallen into the hands of our new heroes, a young engineer and scavenger Rey (Daisy Ridley) and a repentant stormtrooper called Finn (John Boyega).

A droid with a map? Sounds familiar doesn’t it? But, that said, the accusations against The Force Awakens of just being a remake of A New Hope are wrong. What it does is use the dramatic beats of the earlier films to create something new. It’s not a simple retread. This is new, but with conscious callbacks. You really don’t need to have seen the original films for The Force Awakens to make narrative sense. It would help with a few bits and pieces, but generally this is an incredibly well judged new film which works brilliantly without just being a homage, a perfect new step for new audiences.

Our new heroes are fantastically compelling characters, brilliantly portrayed by both Daisy Ridley and John Boyega. They are wonderful. For both characters there is a tangible innocence, a vulnerability combined with toughness. They are our way into the story just like Luke Skywalker was in 1977. Oscar Isaac is great too as ace pilot Poe Dameron. He is almost a more charming, nicer and more sanitised version of Han Solo. And Adam Driver as Kylo Ren does great work, as described above. The vulnerability of his evil is everything that turned Anakin into Darth Vader, but we never saw on screen. The force is awakening in both Rey and Kylo. The light and darkside.

There are plenty of excellent performances. The original actors Carrie Fisher, Harrison Ford in particular, are great. Their weary acceptance of the universe they have battled to keep together is touching and heartbreaking. So many British actors like Daniel Craig, and Simon Pegg appear, as well as stage stalwarts Kate Fleetwood and Dame Harriet Walter that it wouldn’t be a surprise to learn that Judi Dench has been cast in Episode 8. It seems unfair to pick on one performance as seeming out of place, but Domhnall Gleeson’s General Hux lacks the requisite gravitas in all but the moment he is addressing the gathered First Order troops. It would have been nice to see more of that venom.

The Blu-ray has a whole heap of extras, most notably a long behind-the-scenes documentary where it’s clear what an emotional experience a lot of the cast and crew found the making of the film. Plenty of the crew at Pinewood, where a great deal of the action was shot, were the children of crew who worked on the original movies and there is a tangible sense of something being passed on in all quarters of the production. Even the production designers talk about the film (and it was shot on film unlike the prequels) as being a period movie – bringing alive an historical aesthetic with modern techniques. There are several other production featurettes and a four minute selection of deleted scenes which would have slowed down the action and aren’t terribly missed in the actual feature.

What’s clear is that Star Wars is an enormous part of the lives of the people involved. Lawrence Kasdan, one of the co-writers, wrote The Empire Strikes Back and Return of the Jedi and truly understands how to tell the stories of the universe. The script by Lawrence Kasdan, J. J. Abrams, and Michael Arndt is exciting and intentionally funny. There is real trust in the humour – the film is funnier than a lot of comedies but not any less dramatic or serious when needed. It’s a beautifully used tool. In distinct contrast to the po-faced nature of the prequels the characters befriend the audience as well as each other.

Star Wars: The Force Awakens is a gleeful treat. It’s a great film on its own merits, not just a pandering homage. I’m not embarrassed to say I sat in the cinema with a stupid grin on my face. I’m a 40 year old man who first saw Star Wars (as it was plainly called back then) and The Empire Strikes Back as a double-bill when I was six at the cinema with my 32 year old Dad in 1981. It was a proper shared experience of sci-fi glee. Sitting in that cinema it was a real delight to see families with children doing exactly the same thing again.

Watching the Blu-ray today, that smile was still on my face. The movie is so well done it ceases to be just an event movie.

Why? Well, it is moving, funny, exciting and ultimately enormous fun.

Star Wars: The Force Awakens is out on Blu-ray, DVD and On-Demand now – so if you haven’t seen it yet, now’s your chance.